It appears that gluten-free diet is one of the most buzzed about diets of our times. Although it isn’t new, this diet has become more popular over the last 10-15 years. While only 1% of Americans have been diagnosed with celiac disease, there many others, who don’t show clear signs of gluten intolerance, but also ditch gluten believing that its elimination will lead to a better health. And some people give up gluten just to follow latest trends.

Even if you don’t suffer from gluten intolerance, I encourage you to experiment with gluten free flours and incorporate more gluten free ingredients into your diet. Doing so doesn’t have to feel like deprivation – it could be a chance to explore less traditional foods, high in valuable nutrients.

I have recently discovered a chickpea flour (also called “gram”) which is a great gluten-free alternative to a regular flour. This flour is very popular in India, known for its flavorful cuisine and, being suitable for both savory and sweet dishes, is incredibly versatile. It has a higher proportion of fiber and protein than other flours. Additionally, it contains a good amount of nutrients such as: calcium, magnesium and iron.

I would like to share this recipe with gluten-free people and everybody else interested in bringing more variety into their cooking routines. This dish can be served with many different toppings such as: pesto, avocado, radishes, as well as with chopped tomatoes, sweet peppers, spinach and sprouts for lunch, breakfast or dinner.

Here, it’s accompanied with a juicy and crunchy red cabbage slaw that should be prepared at least one day prior.

The recipe will yield about 8-10 crepes (5 inch in diameter).

Stir chickpea flour, water and salt in a large bowl using a whisk. Set aside and let the batter sit for 1-2 hours at room temperature.

Stir the mixture again with the whisk making sure that it’s lump free adding about 1/3 cup more water in the process. Add turmeric and chopped dill or cilantro. Mix well. The consistency of the batter should resemble cream. 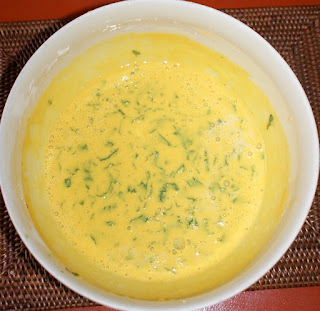 Preheat a skillet over a medium-high. The pan has to be hot, otherwise the crepes may stick to the pan and break. To grease the skillet rub a little bit of the clarified butter or olive oil on the skillet with a paper towel.

Pour about ¼ cup of the batter into the pan (I use a small ladle for each crepe). Tip and rotate pan to spread batter thinly. Brown on both sides and place on a large plate. For extra crispness you can return them to a hot pan for about 30 seconds on each side.

Place the basil, walnuts and garlic in a food processor, preferably a Vitamix blender. Pulse to combine, until the mixture is coarsely ground.

Turn the motor on and drizzle the olive oil in a thin stream. Add the sea salt, pepper, lemon, and parmesan or nutritional yeast, and pulse a few more times to combine. If too thick, add a few tablespoons of water.

Shred cabbage on a grater or mandoline slicer or chop it with a knife. If you own a Vitamix blender, you can shred the cabbage in the blender. In a large bowl toss the cabbage, chopped onion, sliced carrot, dry cranberries, ginger, bay leaves, cloves, allspice, salt and pepper. Prepare the dressing mixing all ingredients until well combined. Pour the dressing over the cabbage and mix well. Let it sit in a cool place or refrigerator to marinate for at least 24 hours.